BRILLIANT FINISH TO THE DAY SITTING DOUBLE STACKED AND I LOST NUT FULL HOUSE TO QUADS TO BIGGEST FISH AT THE TABLE WHEN WE ARE BOTH PLAYING DOUBLE STACKS.  WAS ABOVE EV EARLIER AND OVER £500 UP YET I FINISH £300 DOWN HAHAHAHAHAHAHAHhahahahahhahsfhdfhgfwshggefqwegribnsge4k3o2rnmgsrtkrbmweq3ckoegmrtfgcfdhsrgaetmkgrdhfxgmdzsfAKHMvgzxfdskomnfzsgdafkDMGV kxgdzosfaMDGXxzsgadfkMDZXCFZSDKAMgndfzksxgbcndzsmfdgzsdgfADGFBNZSDEWMgdrhnko xdxczxfsawesxdzwefkcdxxadfmsexsdaxnopéáawqODV XCAEWFSDXCNXDFSEAWRETDGMXHCFCGXFZAWrasxcéáxfasegxcfm áéwsedxbnm nbbnbnszxvb wafzxbcv

...of the most frustrating year online in all my time as a poker player.   each time I think im on a good run and doing well , bang shot back down.   I really wish I could devolve myself of emotion when I play but I know I would find the game even more boring than I already do so this wouldn't work anyway.  thankfully I did well in vegas to keep my profit for 2013 very respectable but this isn't about the money its about losing pot after pot after pot after pot online, it just does my head in.

today ev doesn't even show it as stuff like this was happening.   flop top set and nut flush draw vs 2 pair gutshot and baby straight flush draw.   the guy doenst even chkraise the flop he flats , catches the straight flush then milks me so that pot doesn't even show up on my ev line.   another guy limps QQ681 suit playing 20xbb at 2/4  . I raise kk out pos and flop top set vs his underpair and flush draw and I miss.  same guy then doubles off me a few hands later flatting me with top pair on a 963flop with 2 hearts when he has no flush draw just Q910J.  I hav a pair and a complete wrap and of course miss when the money goes in on the 9 turn.  again ev doesn't show how lucky he is.  and finally I call a 3bet in position 3handed with AQJ8dbl std.  flop Q87.....the guy that 3bet has QQ82 with no suits.  I mean WTF is this shit.  I would go back to mtts but I think I would mind them boring and even more annoying when u sit there for hours only to bust in a similar way.  Sitting on a pathetic £1,500 ish total for the month, nearly all rakeback.

right lets see how many stacks im down below ev this year.  lets forget money for the moment as I will summarize that at the end of the year.

so combined im over 150 stacks behind ev this year.
as an example put this into money context and if all my games were at .5/1$ you would b talking $15,000 behind just through bad luck.  in reality my average game is somewhere around 1.5x higher than this so the -ev is in the 20k$ range somewhere.

summary, please let me run better in 2014 even if its only level to ev, end moan. (for now)

Seems that moan on here helped turn the corner.  Still way behind on ev but only -£800ish not inc rakeback for December now.    heres my 2 main sites graphs..   $200 behind ev on 3rd site but only 670hands so no graph. 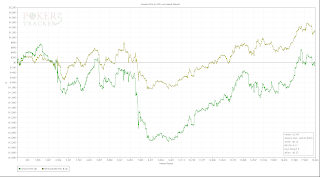 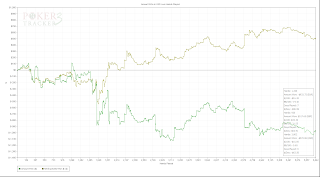 Feels like I should just take the rest of the month off.  I cant do a thing right and im just plain getting destroyed on the cash games.   Its soul destroying stuff and it has to be bad for me to come on here for a huge moan these days and this early in the month.  I even took 48hours off midweek as I couldn't take any more and I return to another massive loss day which is nearly all just bad luck.

The only glimmer today was cashing in the 2nd FTOPS ive played this week but I was leading it halfway through the field so obviously not satisfied with a min cash but whatever.  Anyways heres the stats in $ for ev and £ for loss so far not including rakeback.

so if I ran even im basically level on the month but im sick of saying that sort of shit.   2 big ev losses on 2/4plo and 2/4pl hilo on separate days on my main site were the main culprits before today.   today it was pure hilo on 2nd site and outright carnage some of the stuff you just couldn't make up.

im supposed to be a "professional" but even after 10 years and a decent enough profit this year I just cant seem to get over this stuff to the point of where im not in right frame of mind to play any poker let alone my best poker.   so annoying , this should/could be a heavy grind month when its cold outside and less other stuff to occupy me so I feel im wasting time when im not at the tables ....arrghhhhhhhhhhhhhhhhhhhhhhhhhhhhhhh rant over.  focussssssssss please.
Posted by Robert "Animal" Price at 1:26 am 3 comments:

Probably the littlest poker ive played for years.   Mainly due to long 22 nights in Caribbean, seems to get longer each year !  Already looking at staying a month next time :)

Online went well when I played which was nearly all the first half of the month.   Lost a chunk live though on NL holdem and plo cash as well as a couple of mtts.   Final profit for November came to £1,849.    Sounds bad but I lost £1,300 live as well as a flip in a $1,650 mtt to have gone 4th with 1/3 of the field left on day 2  (was my first significant allin of the mtt) .  Rakeback just under £500 in that too which is tiny.   Overall though im ok with the above figures.

Had a good holiday though but still been slack only playing 2 hours since I got back 4 days ago.  Im hoping to absolutely tank December as much as I can handle it to try and finish the month with a bang and a template for months going forward in 2014.   £44k so far for 2013 so £50k would be genuine target I guess.
Posted by Robert "Animal" Price at 12:24 pm No comments: