The need for more analysis seems appropriate after having my worst day of 2013 a few days ago.  I haven't played since, lost about £2,000 that day although if I had run level ev I would only have lost £100-£200 so I shouldn't really be too concerned.   Just a bit depressing after turning around a 5-6week bad spell so well I had peaked at around +£4k for August before hitting what was only a 150 minute soul destroying session/day.

Anyways I haven't played since and am fairly busy this weekend so not sure if ill squeeze any small sessions in before the end of the month.  Its almost exactly 1 year since my computer crashed and I had to reset my pokertracker data so I reckon it will do my good to post some graphs up for the last year for peace of mind and clarity.  Its amazing how often and easily I forget its all about the long term profit not one particular session/day/week or even month.  My pokertableratings graph is laughable since the turn of the year but this is nearly all due to most of the bad run coming in plo and not hilo which isn't tracked by it.

This one below is all plo and plo hilo on my main site combined.  616k hands in the last year ! 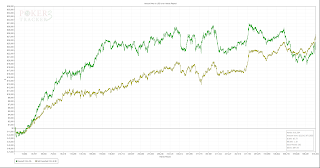 U can see clearly how well I was running at the end of last year when I was $10k-$15k ahead of ev.  I was also raking more back then so add rakeback to this and life seemed easy.  If u look about 1/3 into the graph though u can see the ev line gradually catching up which is basically since the turn of the year.  Then in the 80k hands (or basically since returning from Vegas a week into July) u can see the wall I hit and just how quickly ive lost a lot of $ and to actually go behind ev for the first time on the graph.  The main point is that ev will level out over time and its all about the long term for the bottom line $ at the end of the day. 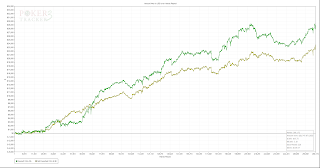 This is why I play hilo as often as I can and not straight plo unless hilo games are dead or im in a rake race so need more volume.


No prizes for guessing the next graph, the diff between the 2 above , ie plo. 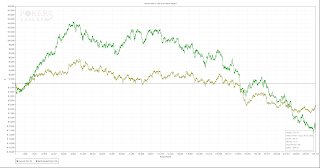 Definitely some tilt and awful play by me back on return from vegas around the 175k mark.  Steadied the boat since but as u can see its a loss overall before rakeback but rakeback would be in the region of $20-$25k for this period.


Now to break down into individual games and stakes.  My most volume games in the last year have been .5/1$ plo ,plohilo and 1/2 plo, pl hilo.   So 4 more graphs to come: 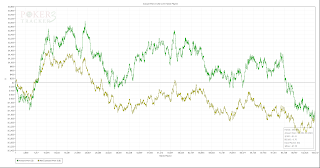 On the face of it not too much to say.  Rakeback of around $7,500 would cover the loss but over the 100k hands u can see its no where near as profitable as hilo for me. 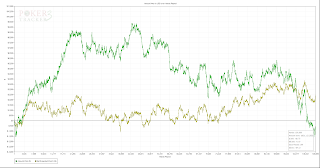 This is maybe a bit more interesting as on ev I would be in profit of $2,500 for 110k hands.  I know I always put more effort into the 1/2games when ive got a mixture up so this kind of makes sense for me and is important when on heavy rake grind promotions etc.   Add rakeback into this of around $10k and it becomes a good earner for me What this doesn't clear up is the loss overall before rakeback for plo which I guess is mainly from 2/4plo.   May do that as an extra graph now although it wont be over as many hands it will explain the loss on ptr a bit more.

Yeah this does clear it all up for me.  Again can see where I ran bad/tilted on return from vegas.  Its a remarkably similar graph to the 1/2 above apart from that bit.  Only over 17k hands though but rakeback wont cover this as it would only be $2k-$3k.

Nothing too surprising here.  Would expect this to be my highest volume game and cash cow.  ev as steady a line as can be and before rakeback earnings on ev of $5,300 over 122k hands. 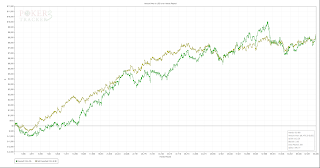 So whats all this told me.  Its confirms to me what I kind of already knew.  Stick to hilo as much as possible if not bored, chasing rake promotions or clearing bonuses.  Don't play plo if im not in the right frame of mind.   Whilst I try to embrace the variance I fail miserably on that front and its another reason to stick to hilo where possible as there isn't as much variance in the game as straight plo.

If I could only enjoy tournaments again I think mixing them with cash games to fill in the gaps could be big but I know I wont put the required effort in if im not enjoying it.  I love the freedom of being able to leave a cash game whenever I want as my mood often changes throughout a session and never really plan or know how many hours im going to play 1 day to the next unless im chasing a promotion.
Any constructive comments appreciated, meanwhile its time to hit the town for a few pints :)

Next month follows same as still need to clear some rake bonus so plo still be in the mix.  Maybe from Oct onwards ill try and phase it out.

Posted by Robert "Animal" Price at 3:22 pm No comments:

Well its been another tough month so far dropping quickly to -£1,600 before floating between -£1000 and -£1400 for ages.  The last few days have gone better though and I actually feel like im playing well too.  Just finally got back out of the hole and sit before rakeback at +£16 for August !  Who knows it might be another 6 weeks before I get in profit again so I thought I would jump on here to celebrate.   Have adjusted both my hilo and my plo strategy a bit and I hope that's why things have changed, im definitely more comfortable playing these styles anyway.  Just have to see...
Posted by Robert "Animal" Price at 2:07 pm No comments:

Brought back to earth before I even had a chance to celebrate June being my best month for 4 years.  July was my worst month since June 2012 although it was actually my worst month online for over 3.5 years if we take into account that June 2012 was predominantly offline.

Rake adjusted figure of -£3,214.   Looked like it could be 1.5-2 times that at one point but did get a bit back towards the end.  Most of it was just plain bad luck (ran around $6,000 under allin ev even though 98% of my games were 1/2 or below) . I didn't play well either for the most part, especially the first week or so after getting back, when I think my plo game was the worst for a long long time with no kind of feel for where I was and probably making bad folds as well as some awful calls.

Would have took more time off but am still clearing bonuses so need to keep playing so a reasonable extent.  The same applies to next month.  Hoping to be in the mood to play a few of FTOPs but will see as ive not been in the mood to play a single mtt since I got back so far.  Anyways plan for August is to just run better and play a bit better too , hopefully :)
Posted by Robert "Animal" Price at 12:49 am No comments: