Volatile month as graph will show if i bother to upload it below.   Profit of £5,821 but adjust for rakeback and its actually less as ive cashed in more than ive raked.   Roughly £3,308 is what i make it.  Sounds good but ive been flat out nearly all month and i got off to a flyer so its all been a struggle the last couple of weeks really. Run well below allin ev again , just not happening yet this year but at least im not losing money ....yet !

Had some monster swings this month both ways, worst was losing over £3,300 in 2 days which involved some extreme tilt but i think its refocused me now ive had a day off and played since.  120k hands too on my main site could be the most hands ive played in a month and is more than double what i normally play, circa 50k.

Im on a promotion while i cashout my rakeback over the next month or 2 which involves me playing a total of 45 days out of 49 of between 7-10hours per day.  So far im 26/28 so im almost certainly committed to this now and have 2 more days off between now and April 21st.   At the end i will have raked $22,500 and will get around 2/3 of that back in cash/package and will also be clearing old rake im cashing in which should give me a bit more freedom to spread across multiple sites in the 2nd half of the year.

Ive been trying out different stuff on both plo and hilo and im not sure just yet how its going but its nice to mix my game up for a change and hopefully it can only lead to becoming a better player , but at the least it will give me a different style i can choose to switch between depending on my mood and the tables etc.

Could return to moaning here more next month but ive been doing it on facebook to a few buddies lately, ill see what i decide as ive got bit bored of boring them now too.  This slog can drive u mental at times but the much needed day off yesterday seems to have recharged me a bit for now !  Anyways gl to all readers and i hope you and me both enjoy April more than March. 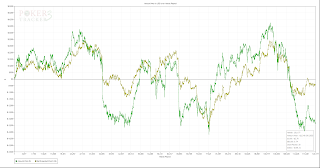 Posted by Robert "Animal" Price at 8:32 pm No comments: