Had worst day all month yesterday.   Didn't even play higher than $1/$2 and managed to drop about $1,800 running massively below ev yet again.    Massive mental test this month and im failing on all fronts.  Took decision to take Sat/Sun off although today hasn't been great as im nursing a self inflicted big hangover.

Will hit the tables again on Monday but may take Tues/Weds off for similar reasons and so I can do 9-10hours on the other days.

Somewhere around -£900 .  Roughly double that to come in rakeback so at the moment im technically still making money despite being about $5,000 below allin ev this month.

Pointless moan over :(
Posted by Robert "Animal" Price at 11:41 pm No comments:

I hope so anyway.  Since the last post ive won/lost/won/lost.   Cant get any consistency going and was still slipping further behind in ev until last couple of days where ive had a mini recovery.  Finally back in profit for the month at +£299 after the 2 winning days both of which were above ev.  Raked almost $7,000 now as well.    5 hours a day kind of suiting me although i think i might need a day off soon.   Maybe next week i will do 5 days out of 7 at  9-10hours again to enable this without losing too much value on promotions.
Posted by Robert "Animal" Price at 11:07 pm No comments: 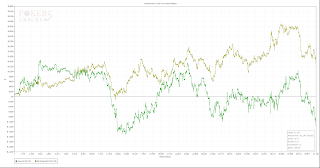 Not to worry just yet as at least im supposed to be in profit based on above + rakeback but its not enjoyable :((

Posted by Robert "Animal" Price at 6:34 pm No comments:

Been a turbulent few days.  Not really getting into this 9hours a day lark so cant see me lasting 4 weeks !   More likely to ease off doing half as much daily and actually have spare time to do other stuff.   Done 4 full days at over $500 rake a day and the volatility isnt helping but generally im just not getting into the slog like i know i can.   Also bad news on rakeback as site im playing is changing their top level soon so the points ive got racked up have lost about 20% of their value (-$10k) since i found this out yesterday.

Graph shows decent enough given how tired ive been on and off but currently well under ev so for the year i clock in at -£61.   Raked $2,800 though so am in profit but just not feeling this routine.  Think ill either play 9hours 2moz or have a day off and do 9hours Saturday.   Sunday off then just $250 rake a day every day will only be 4-5hours and will probably suit me better.  Hopefully what i lose in rake i can make back by not being so tired and playing a few less tables at once.   That said if i do play tommorrow i might change my mind and just carry on with the outright slog !!!
Posted by Robert "Animal" Price at 12:56 am No comments:

Didnt play much the first 6 days but all was fairly steady for what i did.  Been building up to a grind that started today.  Am still not sure but might try doing $500 rake per day for 28days straight but ill just see how im feeling after days/a week or so.

Rough day anyway, done over 5000 hands and was ok the first 2/3 of that.  Was showing a slight profit and slightly below ev then basically the shit hit the fan.  Some of the stuff i saw was just beyond belief , i will give one example below of when ev doesnt come into play on the graph.

This fish didnt hav a clue what he was doing, he should have stacked me 5minutes earlier when i had wrap flush draw vs his top 2 on flop.  turn gave me the nuts with a redraw but river paired to give him the full house.   i check to him and he checks the 2nd nuts behind when there was no way in the world i was folding the way the hand had played.  Basically this guy hardly ever bet and just called the most ridiculous spots.

Anyway on to the hand that completely sums up the last 3rd of my day... 1/2plo
Dam i got history of wrong hand emailed, have to it from memory.

utg raise to 6 fish call and i call in position with JJxx, 1 suit mayb but suits dnt play this hand neway. 1 of blinds call so 4 of us to flop.  utg bets $4 into a J83rainbwo flop , fish calls and i dnt pot raise but make it 22ish which just fish calls.   turn is a 6 and fish chk calls close to pot which was now about 70+ , i remember betting 62 or 64 i think.   board is still rainbow and river is a 2.  fish checks and ive got 105 left behind which  i obviously bet allin.  he tanks for mayb 20seconds before callin with J4510.   i was already gettin beaten up b4 this hand so i just laughed, and before anyone thinks he was checking to induce a bluff, i call tell u 99% certain he wasnt, just didnt have a clue what he was doing.

another joker just called off over half his stack preflop with 5533 and happily chucked the rest in on a 874flop to catch a 6 vs my committed aces.

Anyways ill try and get a good nights sleep and regroup to bash out a good day tommorrow but ive run so good for so long im due a bad run but i also know im gonna struggle if this lasts any period of time.  Lost over $1800 on the day, 1000 below ev.  Should mention i didnt play higher than 1/2 today, so its hurting more cos of that i guess.