A big effort by Dusk Till Dawn to make this an event to remember !!!

Posted by Robert "Animal" Price at 3:58 pm No comments:

Too much of a grind but its done  45 days out of 48 playing 7-10 hours.  Hindsight is a great thing but this hasnt been worth it at all overall.  Yeh ive made a solid profit but tilt and hatrid have flowed through my veins the last 2 days as well as earlier in the month once and 3 or 4 times last month.   Basically this was just too long and too much per day without enough time off.   I write this to note for future grinds as its too late to save my mental state in this one.

I hope/think now im not forced to play i might just begin to enjoy the game again but there will be plenty of time off up to the end of April for sure 100% only playing if im in the mood.

This month adjusted for rakeback is around the £5,000 mark but i will post a final figure for April on the 30th.  Sounds great but it was close to £8k at peak and tilt/run bad/play bad has just destroyed that.  Also ive played 19/20days so am just completely drained.   Gonna try and do more months like February the rest of the year across more sites with less volume and more hilo giving plo much less attention.

I now sit around £14,000 for 2013 but im approximately £6,000 below ev so i had run around level i acutally would be on a solid £5k per month = £60k year which is is over my £50k target so i should be happy !!!!!   Deffo need to work on enjoying this game more in the future, thats my biggest problem for sure in the short/long term.   Unsure which graph to put below, was gonna do just april but i think ill post the whole year one (for my main site) to try and keep me sane.   Spot where the huge grind started as it affected my ev line in a big way which was so nice and straight before it !!!  In fact if it wasnt for my best day in about a year last Saturday things would look a lot different. 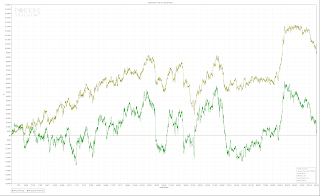 Posted by Robert "Animal" Price at 6:36 pm No comments: